skip to main | skip to sidebar

I took a break last night... 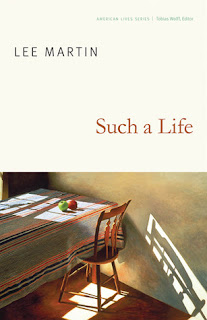 ...from reading Father's Day to pick up another book I got from the library recently, Such a Life, by a guy named Lee Martin.

Father's Day can be a little hard to read. The author, Buzz Bissinger, has a lot of issues himself and hasn't dealt very well with his feelings toward his son. I hope writing this book was therapeutic for him.

(I'm just about to start Chapter 12, "Boobie," about the real-life Boobie Miles from Friday Night Lights.)

Such a Life is a collection of essays that form a memoir. Lee Martin is about three years older than me and grew up in southeastern Illinois. He's a professor of English at Ohio State who teaches creative writing. From the book jacket:

Lee Martin tells us in his memoir, “I was never meant to come along. My parents married late. My father was thirty-eight, my mother forty-one. When he found out she was pregnant, he asked the doctor, ‘Can you get rid of it?’” From such an inauspicious beginning, Martin began collecting impressions that, through the tincture of time and the magic of his narrative gift, have become the finely wrought pieces of Such a Life.


Whether recounting the observations of a solemn child, understood only much later, or exploring the intricacies of neighborhood politics at middle age, Martin offers us a richly detailed, highly personal view that effortlessly expands to illuminate our world.

At a tender age Martin moved to a new level of complexity, of negotiating silences and sadness, when his father lost both of his hands in a farming accident. His stories of youth (from a first kiss to a first hangover) and his reflections on age (as a vegan recalling the farm food of his childhood or as a writer contemplating the manual labor of his father and grandfather) bear witness to the observant child he was and the insightful and irresistible storyteller he’s become. His meditations on family form a highly evocative portrait of the relationships at the heart of our lives.

It's really a good read; I couldn't put it down. I got about half-way through it before I had to go to sleep.
Posted by mtracy at 6:19 AM